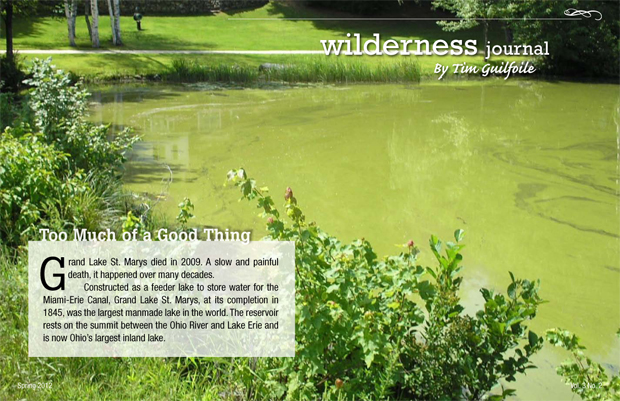 Grand Lake St. Marys died in 2009. A slow and painful death, it happened over many decades.

Constructed as a feeder lake to store water for the Miami-Erie Canal, Grand Lake St. Marys, at its completion in 1845, was the largest manmade lake in the world. The reservoir rests on the summit between the Ohio River and Lake Erie and is now Ohio’s largest inland lake. 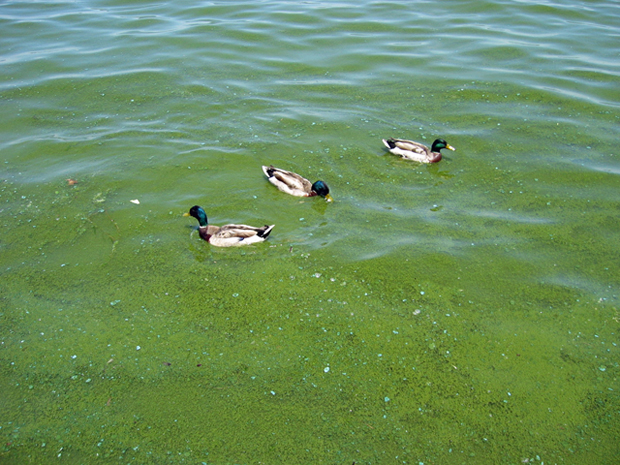 Grand Lake is home to more than 11,000 residents, hosts more than 750,000 visitors annually, and accounts for an economic contribution to the area worth more than $150 million annually. With over 13,500 acres of water and 52 miles of shoreline, the lake is situated along one the country’s major migration routes. Birds using the lake as a resting stop include Canada geese, ducks, grebes, swans, egrets, loons, herons, cormorants, and ospreys. In addition, inhabitants included a nesting pair of bald eagles.

The death of Grand Lake St. Marys has devastated the business community. Home values have been reduced. Boating, fishing, including many professionally organized tournaments, water skiing, and all the other recreational activities that bring families together are now on hold. And fish and wildlife habitat have been decimated.

The cause of death was an overload of nutrients from throughout the watershed. Nutrients? How could nutrients, something that we hear advertised every day as essential to our health and well being, be deadly? As in almost everything in life, it’s too much of a good thing.

When excess nitrogen and phosphorus accumulate in a waterbody, eutrophication occurs. Eutrophication is the process by which a body of water acquires high concentrations of nutrients, especially phosphates and nitrates, which promote excessive growth of algae. You’ve seen it before. The algae overwhelm the system and it slowly takes over the surface and depths of the water.

The second phase of eutrophication begins as algae die and decompose. High levels of organic matter and decomposing organisms deplete oxygen levels in the water. Eutrophication is a natural, slow-aging process for a body of water, but human activity so dramatically increases the process that levels of oxygen are not sufficient to support aquatic life. These areas with very low oxygen concentrations are called “dead zones” because they will not support aquatic life, including fish, shellfish, and other forms of life, including plants.

Most of the algae present in Grand St. Marys are a blue-green algae called Planktothrix, which produces a microcystin toxin that can cause skin rashes, sore throat, runny eyes and nose or allergic reactions, and gastro-intestinal distress (vomiting, diarrhea). It can also be toxic to the liver and kidneys, if ingested in significant quantities. This species of algae is also a neurotoxin that can cause weakness or dizziness, breathing difficulty, and convulsions. Further, it can sometimes cause death in small animals, such as dogs, that ingest water containing microcystin toxin.

So not only is Lake St. Marys dead, it is deadly.

How did things get so bad? Lawn fertilizer from the 11,000 homes runs off into the lake with high levels of nitrogen and phosphorus. Grand Lake straddles Mercer and Auglaize counties, and the 58,000-acre watershed around the lake is home to the largest number of swine farms in Ohio and the second largest of cattle and calf farms. Many of these farms concentrate animals and therefore their manure in a very small space and produce unfathomable quantities filled with nitrogen and phosphorus that runs off into the lake.

Unfortunately, Grand Lake St. Marys is just one small story in the scheme of things. Nitrogen and phosphorus are the most prevalent and serious water pollutants in the United States. This pollution comes from the same sources as those that killed St. Marys. Runoff from lawn fertilizer, home cleaning products and detergents, agricultural fertilizer and manure, and sewer overflows and discharges from sewage treatment plants are the culprits.

And the magnitude of the problem is staggering.

The entire Mississippi River Basin—two thirds of the United States—has excess nitrogen and phosphorus in its waters. The dead zone in the Gulf of Mexico, caused by drainage from the Mississippi River, is the size of Massachusetts and continues to grow. Additionally, the United States Geological Survey has documented dead zones in nearly every coastal waterway on the East and West coast, as well as the Florida coast. For the last two summers, Lake Erie was completely overwhelmed by eutrophication. Finally, there are intermittent dead zones in nearly every water body in the eastern United States.

Remember the toxic algae? It is almost everywhere, especially in the summer months.

To make matters worse, nitrogen and phosphorus have also been found in 78% of wells, which provide water for 15 million households in the United States. Elevated levels of nitrogen have also been found in municipal drinking water supplies. Therefore, people living in the Mississippi River Basin, the Northeast, and Southeast are at substantial risk for exposure to one or more of the adverse effects of nitrogen and phosphorus pollution.

The impact of this form of water pollution is devastating to wildlife. Fish and other aquatic species are on the decline. Aquatic plants are dying off. Migratory and resident birds are losing habitat at an alarming rate. Small animal species, at the bottom of the food chain, are getting sick and mortality rates are climbing.

The problem is enormous, but the sporting community has the power to suggest implementation of solutions that have been a part of their vernacular for decades. Those solutions are protection and restoration of habitat.

We have lost over 50% of our wetlands and wetlands are nature’s finest water filters. If we ensured no more loss and began a nationwide program of restoring wetlands, our waters would begin recovering.

Riparian buffers are a vegetated area (buffer strip) along both banks of a river or stream. They play a key role in increasing water quality in associated streams, rivers, and lakes. They also result in preventing the decline of many aquatic ecosystems. Again, prevention of further loss of riparian buffers and a systematic approach to restoration will reduce pollution and improve water quality.

We do need to reduce the use of agricultural and lawn fertilizer. Elimination of nitrates and phosphates in household products is essential. Implementation of farming and livestock practices that will dramatically reduce runoff are a requirement. Establishment of standards that will regulate the concentration of nitrogen and phosphorus in our waters must be adopted. However, without protection and restoration of wetlands, floodplains, buffers, and other natural systems, we will not win this battle.

America’s sportsmen were the country’s first conservationists. Sportsmen and women, more than any segment of our society, are out there in the backcountry, in rural areas, and along streams, rivers, and wetlands. This community is the most recognized and effective voice for issues surrounding protection and restoration of lands, water, and wildlife. Turning this passion into action will dramatically reduce our most serious water quality issue and protect human health. The sporting community could be the most significant impetus for change.

There are efforts underway to treat and recover Grand Lake St. Marys that will likely cost millions of dollars. Nevertheless, even if they are successful, we are doomed to repeat this tragedy unless we change our ways.