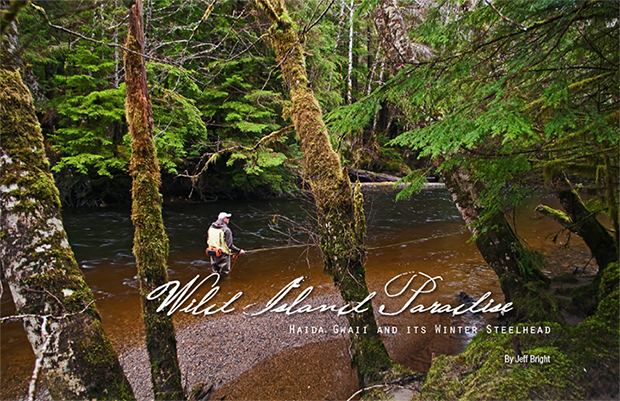 Poking skyward from the sea off the northern British Columbia coast is an archipelago offering one of the most unique venues in the short list of high-profile steelhead flyfishing destinations. Known from colonial days as the Queen Charlotte Islands, and formally renamed in 2010 to represent its native people, Haida Gwaii harbors in its ancient, moss-draped forests an array of streams home to runs of large, wild winter steelhead—fish every bit as impressive as their cousin summer-runs born across Hecate Strait in the famous Skeena watershed. 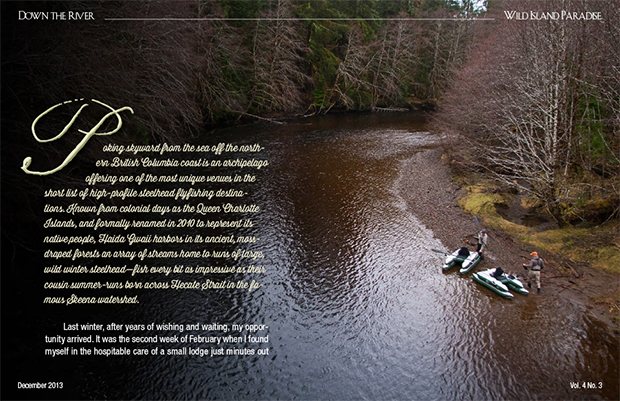 Last winter, after years of wishing and waiting, my opportunity arrived. It was the second week of February when I found myself in the hospitable care of a small lodge just minutes out of Sandspit on the northeast corner of Moresby Island.

Haida Gwaii is home to the Haida people, a fierce sea-faring tribe who for centuries inhabited these islands on the western edge of the North American continent, ruling the region and living well on the bounty of the North Pacific. Today, despite near total collapse in the 1800’s from exposure to a litany of diseases, chiefly smallpox, during the marine fur trade era, Haida civilization remains significant on the islands. Steelhead here are no different. They are a breed apart, strong-willed, resilient, adapted to thrive in a unique environment—and firmly hanging on. While most steelhead of northern BC are summer-, fall- or spring-run fish, like the vanished runs of east Vancouver Island most Haida Gwaii steelhead are true winter-runs. Entering freshwater between November and the end of March, most will spawn in late April or May along with a component of fresh arriving spring steelhead. They average 10 to 12 pounds, but those who know say Charlottes steelhead tend to be thicker, stronger creatures than the typical summer-run fish.