Turkey Ninja: Rachmaninoff and the Pursuit of Meleagris :: Story by Terry Wieland, Illustrations by C.D. Clarke 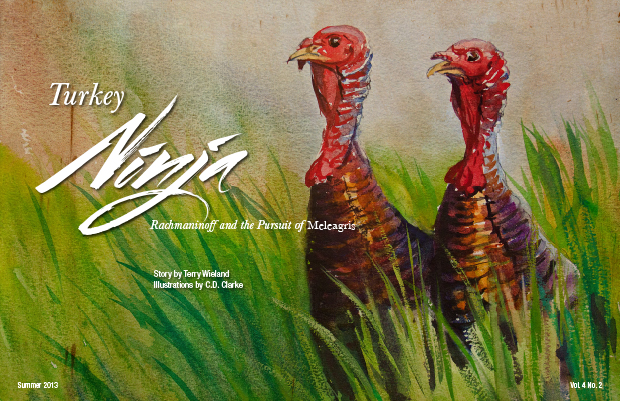 You have to admire obsession in a man. It has a life of its own. Obsession lays out the hunting regulations from half a dozen states, and draws flow charts with dates, routes, and driving times. Obsession owns camouflage clothing for every type of foliage in the central United States. Obsession knows no surrender.

We were waiting for C.D. Clarke to arrive, huddled by the fireplace, listening to the rain pelting the windows. It was mid-April in Missouri, a time of year when, supposedly, new leaves glisten and the lilacs bloom. Instead it was, as the saying goes, a nice day for February. My two-hour drive to Ralph’s farm had been an ordeal of 18-wheelers, bow waves, and windshield wipers fighting a losing battle.
Now, the forecast was for snow—snow!—and freezing cold and then more rain. Chance of sun tomorrow afternoon, they said. Then more rain. 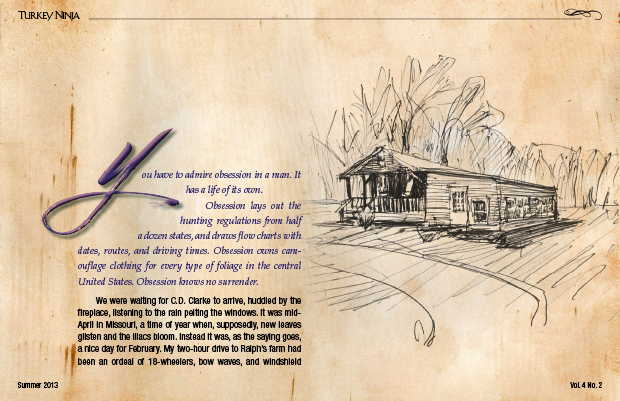 C.D., my turkey-obsessive artist friend, was making the two-hour drive from the airport into the heart of Missouri’s fabled turkey country—fabled, at least, since 1990—intent on adding a mid-American gobbler to his burgeoning collection of turkey body parts. He had three days in which to accomplish that, along with his avowed intention of turning me into a turkey hunter.
He didn’t mind the drive, he said. It gave him a chance to listen to his tape of turkey calls.
“Did you read those books?” he asked.
“No,” I said, “I’m trying a new tack. Going into this cold, with no preconceived ideas about turkey hunting.”
“What about camouflage? Did you get some?”
“No.”
“Figured as much,” he said grimly. “I brought extra.”