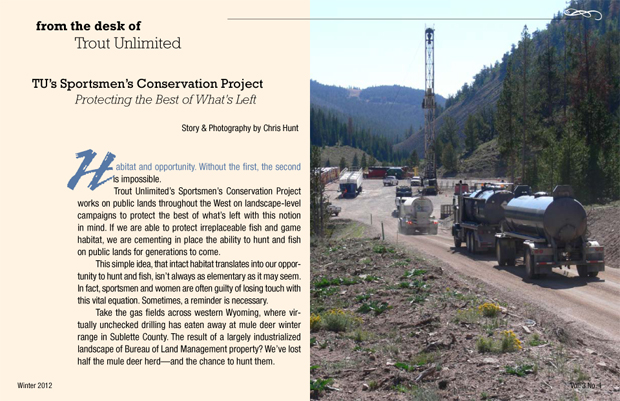 Habitat and opportunity. Without the first, the second is impossible.

Trout Unlimited’s Sportsmen’s Conservation Project works on public lands throughout the West on landscape-level campaigns to protect the best of what’s left with this notion in mind. If we are able to protect irreplaceable fish and game habitat, we are cementing in place the ability to hunt and fish on public lands for generations to come.

This simple idea, that intact habitat translates into our opportunity to hunt and fish, isn’t always as elementary as it may seem. In fact, sportsmen and women are often guilty of losing touch with this vital equation. Sometimes, a reminder is necessary.

Take the gas fields across western Wyoming, where virtually unchecked drilling has eaten away at mule deer winter range in Sublette County. The result of a largely industrialized landscape of Bureau of Land Management property? We’ve lost half the mule deer herd—and the chance to hunt them.

Nearby, in the Wyoming Range, a vast and productive landscape that is home to mule deer, elk, moose, bighorn sheep, and three of Wyoming’s four subspecies of cutthroat trout, a gas well was drilled on the banks of Fish Creek in 2006. The well dusted out—no gas was recovered. But the well pad, which is the size of a grocery store parking lot, and the two-lane dirt road that was once a lonely jeep trail remain—the backcountry is now the front country, and the pad and the road now contribute silt and sediment to the Colorado River, a native cutthroat trout stream.

Nobody is saying we can’t drill for oil or gas on public lands; and nobody is saying that industrial development shouldn’t be a part of our economic landscape in the American West. But the country’s sportsmen and women are warming to the idea that intact habitat not only secures opportunity for their kids and their grandkids, but it ensures economic activity, particularly in the rural West, where hunting and fishing are viewed as long-term renewable economic resources that will pay off for generations, so long as that all-important factor—habitat—is kept healthy.

And this notion is spreading to the recreation industry. Tenkara USA, a company that manufactures and imports tenkara fly-fishing rods and tackle, recently gave its “1% for the Planet” donation to the Sportsmen’s Conservation Project. The reason? The SCP works diligently to protect intact backcountry habitat, which includes the mountain streams of the Rockies, on which tenkara fly fishing depends. The company has made the connection: Habitat equals opportunity, which translates into economic activity. In other words, without those cold, clear waters running off the spine of the continent, tenkara fly fishing might become a memory.

It’s past time for others in the industry to get involved—and not just the fly-fishing industry that depends on clean water and public access to public lands. This equation is just as important to the manufacturers of hunting rifles, compound bows, and spinning reels. It’s important to any company that manufactures equipment meant for use outdoors, where hunters use wall tents and anglers brew their morning coffee over a propane stove.

And it’s important to any business that makes its living serving those who venture outside, particularly those who take advantage of the public lands that belong to every American as a birthright. Keeping those lands, and the waters that flow through them, just as they are now should be viewed not as a feel-good effort, but rather as an obligation to those they serve, and to the next generation of consumers who will no doubt want the best spotting scope or the finest fly rod to pursue their quarry in a place that is much like it was nearly two centuries ago.

Habitat equals opportunity. Opportunity equals economy. Please help us protect the reason we all venture outside.

Chris Hunt is the national communications director for Trout Unlimited. He also blogs at www.eatmorebrooktrout.com.

To read more go to www.thecontemporarysportsman.com