Moving Beyond Pebble Mine :: Russ Schnitzer 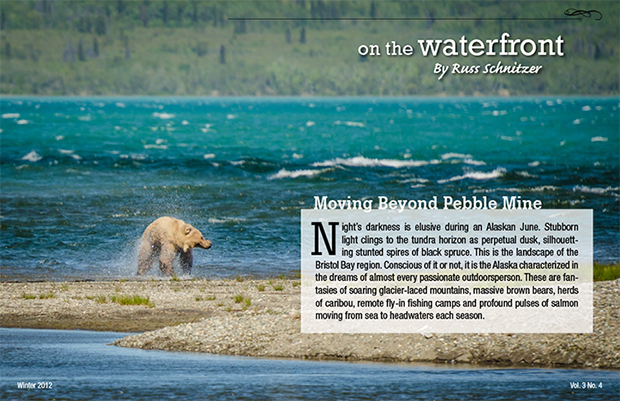 Night’s darkness is elusive during an Alaskan June. Stubborn light clings to the tundra horizon as perpetual dusk, silhouetting stunted spires of black spruce. This is the landscape of the Bristol Bay region. Conscious of it or not, it is the Alaska characterized in the dreams of almost every passionate outdoorsperson. These are fantasies of soaring glacier-laced mountains, massive brown bears, herds of caribou, remote fly-in fishing camps and profound pulses of salmon moving from sea to headwaters each season.

While many of us travel to Alaska to get a fleeting taste of its wildness, thousands of residents call this place, this landscape, home. For all its superlatives fueling the fantasies of sportsmen and women from around the globe, Bristol Bay is also a region rich in cultural traditions, enduring and most evidenced by the subsistence lifestyle of its residents and native peoples. These are commercial anglers who provide sockeye salmon for our tables; they are the pilots and guides for hunters and anglers. What they have in common is a strong tie to the land. Wild land, working land. The Bristol Bay region represents the very heart of what is truly the “Last Frontier.”

Bristol Bay is fed by numerous rivers, the names of which comprise a roll-call of once in a lifetime fishing destinations─names like Nushagak, Talarik, Kvichak, Mulchatna. These rivers are as productive today as they were hundreds of years ago, while supporting the region’s communities. Indeed, the region’s rivers support the largest runs of wild salmon in the world. Known most for their sockeye and Chinook (king) salmon, you’ll also find outsized native rainbow trout, dolly varden, grayling, arctic char, northern pike, and more. Beyond the preponderance of species, this is also a region where hooking in to a true “fish of a lifetime” exists on every river, every day, with every single cast.

Until recently, Bristol Bay existed largely untouched by the modern world. Here, calendars are built on the foundation provided not by weeks and months, but by the various salmon runs, caribou migrations, winter freeze-up and spring break-up. These same elements support the region’s economy, which is built significantly on commercial and sport fishing. It is an economy that works for rural Alaska, and one in which residents are proud to participate and pass down to their children. Sportfishing alone contributes $60 million to Alaska’s economy every year. The commercial fishing industry in sum constitutes approximately 75 percent of all local jobs in the region. Thanks to diligent and progressive fisheries resource management, this economy has also proven itself to be sustainable.

No place on this Earth is insulated from change resulting from economic pressures. In recent years, an unseen facet of the Bristol Bay region’s natural resource wealth known as the Pebble Deposit has become the target of would-be developers. An ambitious open-pit mine proposal is on the table to extract its gold, copper and molybdenum, threatening to forever alter a huge chunk of Alaskan wilderness. If built, the mine would become one of the largest open-pit mines in the world, and would sit right between the Kvichak and Nushagak Rivers. According to www.savebristolbay.org :

…preliminary designs indicate that the Pebble Mine complex would span 20 square miles of state land in the Bristol Bay watershed. Located in a seismically active region, Pebble would require the world’s largest earthen dam to be built, some 700 feet high and several miles in length. Independent scientists have questioned whether the dam could withstand the force of a massive earthquake, such as the 9.2 quake that devastated Anchorage in 1964.

The dam and 10-square-mile-wide containment pond are intended to hold between 2.5 billion and 10 billion tons of mine waste that Pebble would produce over its lifetime—nearly enough to bury the city of Seattle, WA. Because the sulfide, or acid-generating, nature of the Pebble ore body, the waste would require environmental treatment in perpetuity. Any release of mine waste into the surface or groundwater has the potential to harm Bristol Bay’s salmon runs.

True, we need natural resources such as the precious metals provided by mining. However, we must recognize that not every place should be sacrificed in order to produce them. Bristol Bay is nothing less than a national treasure. We should recognize for its sustainable benefits to residents and the wonder and once-in-a-lifetime experiences it continues to offer visitors. The time has come to take the Pebble Mine proposal off the table, and secure Bristol Bay’s legacy for generations to come.

To see the rest of the photos and read more great stories like this go to www.thecontemporarysportsman.com